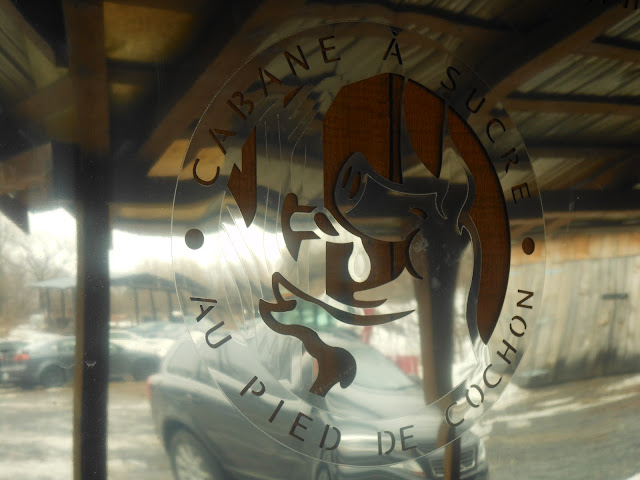 With the ever so growing culinary adventurers in quebec, the sugar shack was inevitably going to go through a makeover through the magical hands of some wild chefs.  From my past posts on surprising and unexpected sugar shack meals (here and here), I thought I've tasted it all and that it couldn't get any crazier.  Little did I know what Martin Picard, the owner of the restaurant Au Pied de Cochon, was about to get us into once more.  The most intense, unimaginable, but oh so worth it, food coma! 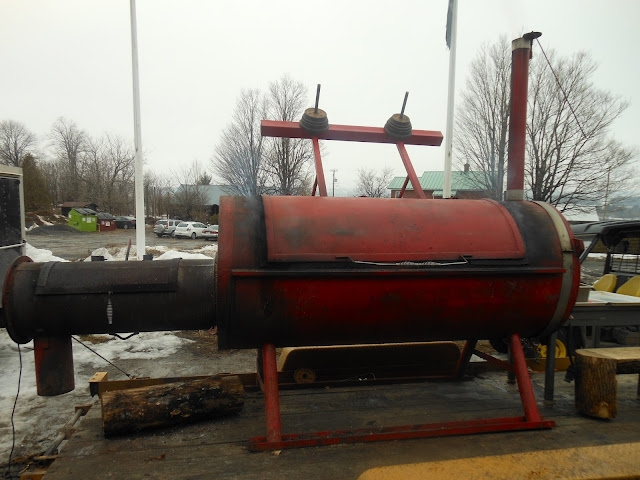 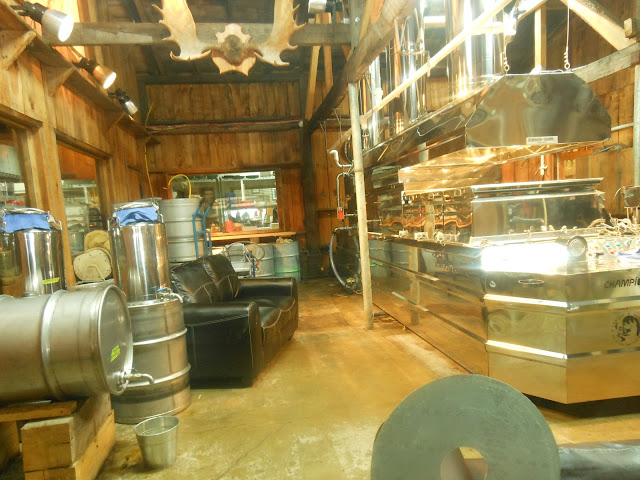 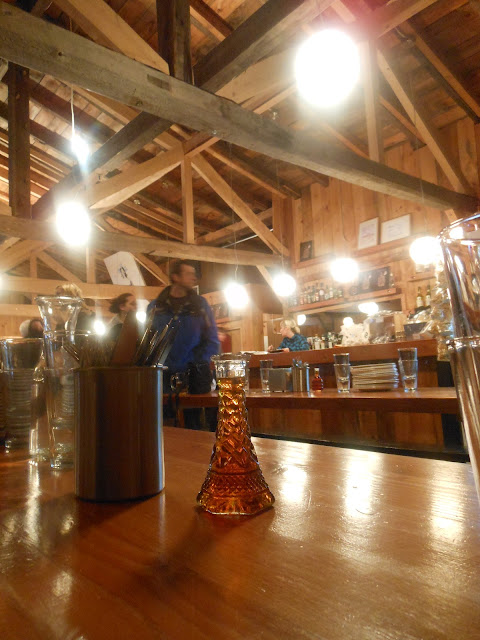 First, you must understand that in order to get a place at La Cabane à Sucre Au Pied de Cochon, you must put your emails settings in automatic with a pre-written message for your reservation and have it sent automatically to the sugar shack team on December 1st.  Otherwise, good luck on trying his dishes.  The reservation list is long, but you must not lose hope and keep trying until you get that call!

Located around 1 hour from Montreal, at Mirabel precisely, La Cabane à Sucre Au Pied de Cochon looks like any traditional sugar shack from the outside.  However, they do have their own smoker which already gives us an idea of how awesome the meal will be.  As soon as you enter, you sense excitement in the air.  Home made maple products such as marshmallows, cotton candy, meat pie and more can be brought back home.  They also had the latest book from Martin Picard where the infamous squirrel sushi recipe can be found. 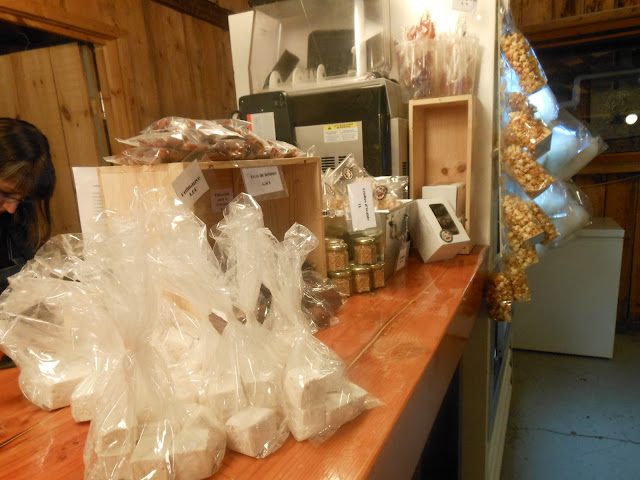 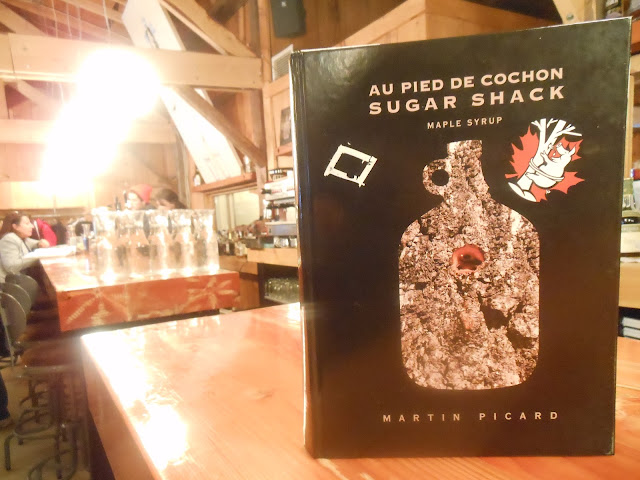 The waitress welcomes us and start rolling out what is waiting for us: 3 appetizers, 4 main courses, 6 desserts and if we want, a meat pie.  Hello! Of course we want the meat pie! We prepare ourselves for this meal by unbutonning our pants to allow more space and drinking as less water or beer as possible… here we go:
1. Pickled herring with maple syrup, potatoes, pickled onions, maple mayonnaise 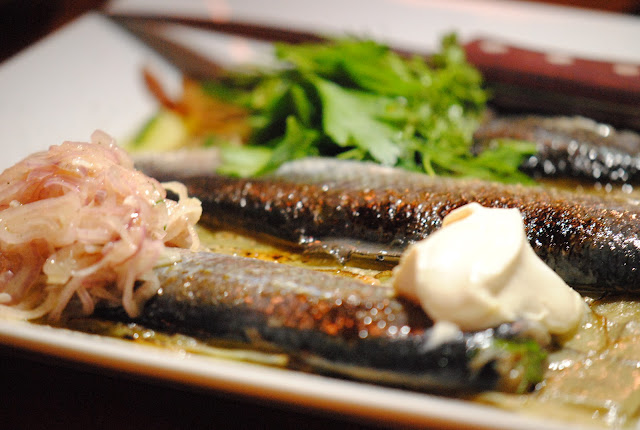 I was surprised at how flavorful this dish was.  The herrings had a touch of acidity and was wonderfully paired with the sweetness of the maple syrup.  The potatoes are sliced paper thin and added an interesting texture with the onions.
2.Terrine: veal brain, sweetbreads, tongue, blood pudding, foie gras, goat cheese, endives salad, blinis 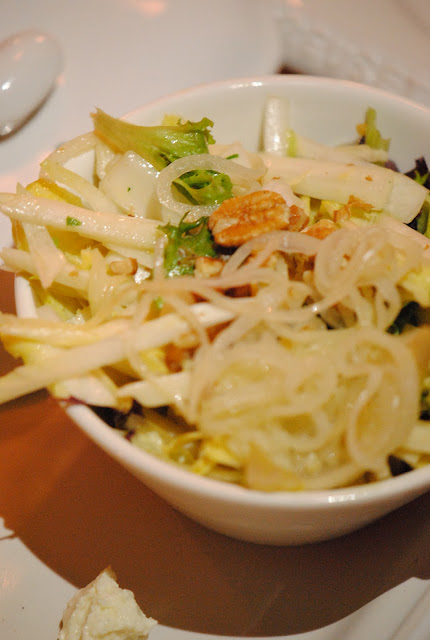 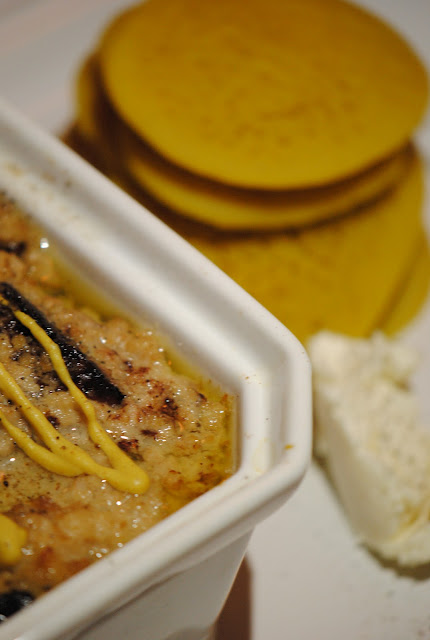 This dish was absolutely fabulous! A mix of various organs such as veal brain, sweetbreads, tongue along with blood pudding and foie gras all shaped into a terrine.  Seriously, we felt like we were going for a treasure hunt, finding a different piece every time we dug into it! It was bursting out of flavor and the foie gras binded beautifully the meat together while adding this liver taste to it.  And the spices in the blood pudding was simply spot on.  It was served with a goat cream cheese which was unctuous and rich.  Served on the blinis, the terrine and the cheese was a mouthful of heaven.  The endives salad cuts through the fat with its slight bitterness.
3. Sturgeon fried cake: Fried sturgeon, oreille de crisse, gold leaf, soya sweet sauce 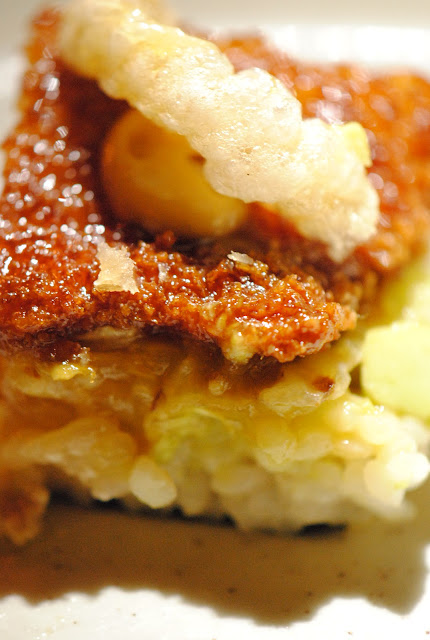 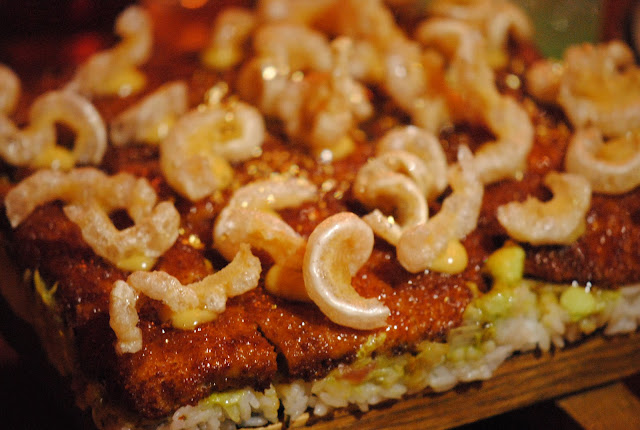 A work of art! Nothing less can describes this dish! Wonderfully layered, sushi rice, fried sturgeon, incredibly crispy oreille de crisse, and to amp up the luxury of it, a layer of gold leaves! Ha! That 'sushi' was so damn crunchy and the addition of their sweet creamy soya sauce made it oh so delighful! People on the table were just fighting over these morsels of deliciousness.
4. Home made meat pie and ketchup 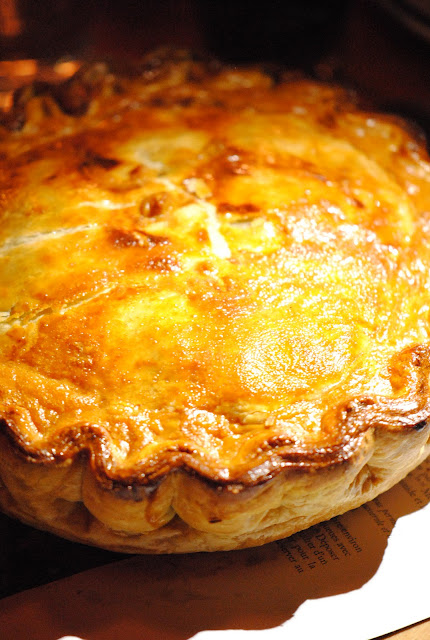 The meat pie was an option.  For 20$, you could add it to your meal and guys, trust me it is so worth.  First, it is huge! Thus, you can easily separate it throughout your table and end up only paying 2$ the piece. Second, it is really really the best meat pie i have ever tasted.  The crust is ever so flaky and buttery… ahhhh…. And the meat! You literally have chunks of meat! Not just potatoes like the store bought ones! Flavored with spices and herbs, every bite bursts of flavor and is only enhanced with the addition of the sweet and tangy ketchup.
5. Soufflée omelet with lobster and maple smoked meat and cream cheese 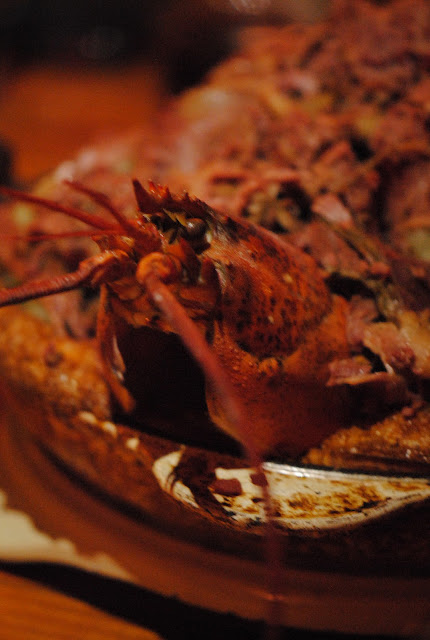 A repeat from last year's omelet but with an added bonus! Montreal's well known smoked meat!  A light and fluffy omelet with a touch of creaminess from the cheese, crowned with the head of the lobster, was an absolute show stopper.  Big pieces of tender and sweet lobster mingled with smoked and salty smoked meat complemented this once traditional dish of sugar shack.  Although very grandiose, it wasn't my favorite as I found it too salty.
6.Foie gras vol au vent, Victor and Berthold cheese, béchamel sauce, oreille de crisse, apples, watercress salad 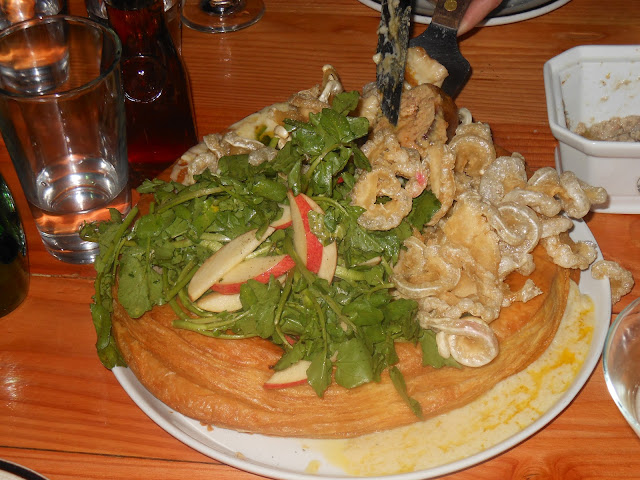 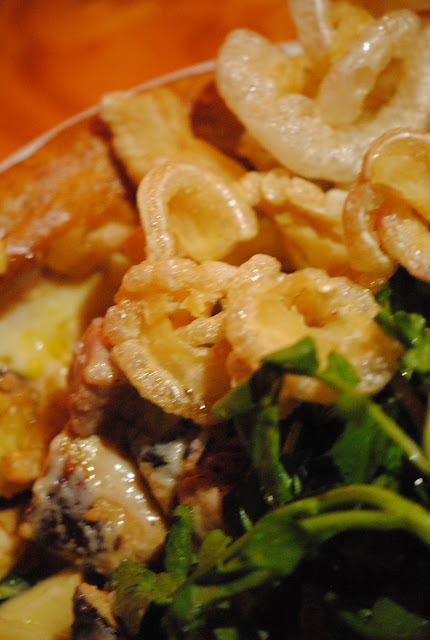 At first glance, you would have thought, uh!  A salad?!? Oh no! Foie gras lovers beware! There were three whole lobes of foie gras hidden inside the flakiest vol au vent pastry! Although there was watercress and apples to cut through the culpability most of us felt at this point, the combination of the generous amount of foie gras and the smooth and creamy bechamel sauce with the cheese was just downright sinfully decadent.  And of course, they had to top it off with the oreille de crisse! But seriously, they are not joking when it comes to foie gras! Wow! My liver became fatty at this exact moment.
7. Baked beans, cottage cheese, smoked duck 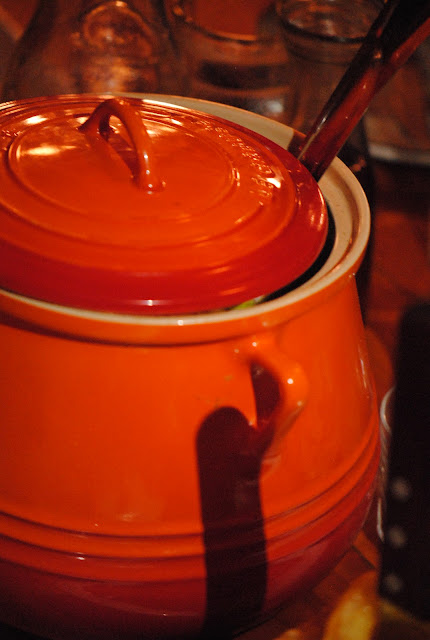 Again, a moment of déjà vu from last year's meal but again, they never fail to surprise us.  Served in a beautiful pot, the beans were topped with a dollop of cottage cheese.  Hidden beneath were drumsticks of duck smoked and tender to the fork! All of us only noticed it at the end, and to my delight, they've let me take it home with me :D
8. BBQ pork belly and buttocks piglet from Gaspor farm, cabbage and potatoes, spaetzel 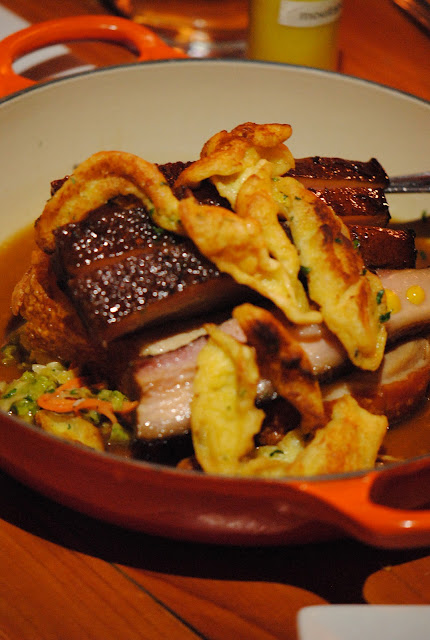 This Gaspor baby is just so incredibly tender on the inside and crunchy as hell on the outside!!! Oh gosh! Glistening from the maple syrup, this pork redefined bacon.  The slabs of pork belly were simply the epiphany of bacon.  Although some found it way too fatty and greasy, combined with the cabbage and spaetzel (crispy strips of dough), it just did wonders to my mouth.
9. Roasted duck breast in maple syrup, onion rings in duck fat 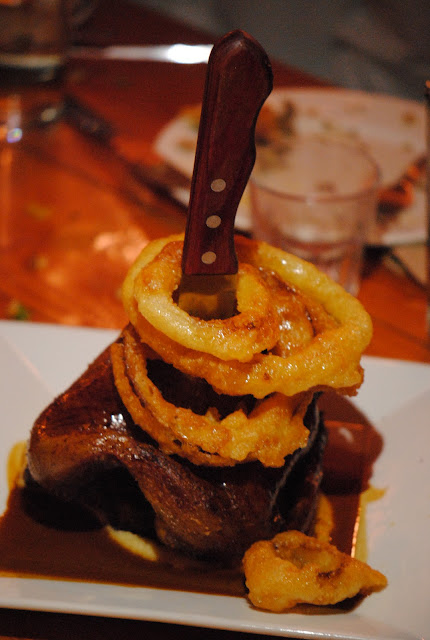 With a big knife right in the breast of the duck, it made a statement by itself.  I considered it as the Wild Chef's version of Pekin duck.  Light and crispy skin with a fork tender meat, this dish was fun to deconstruct with the knife and made my taste buds really happy.  The onions rings on the other hand absorbed a little too much of the duck fat and taste nothing but fat unfortunately.
10. Maple and skor blizzard, maple taffy an maple mini cones 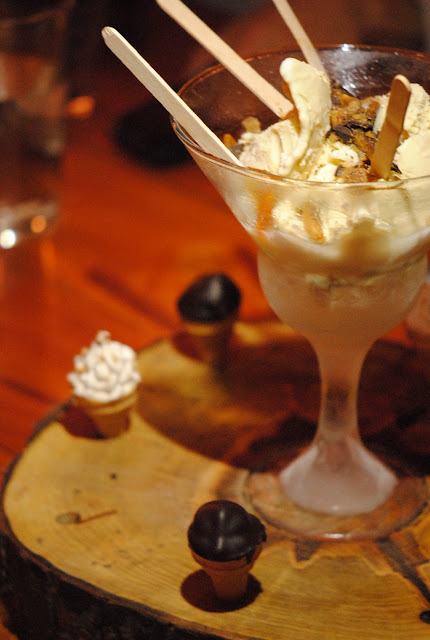 Although my body probably wanted to kill me inside out, I just could not resist this dessert!  As weird as it might sounds, the cold ice cream just made me feel so good.  Maple and ice cream is the most perfect marriage of flavor there is, and Skor, the caramelized crunchy butter toffee from Hershey, made it the triangle of awesomeness!  And they smartly added sticks of taffy on the ice cream which acted as snow. Maple taffy + maple ice cream + skor = orgasm. Nothing less.  It was served in a frozen glass that was resting perfectly on a wood log in which little holes were shaped to fit mini cones of maple desserts. These latter were filled very sticky maple candy topped with maple marshmallow. Pillows of heaven.
11. Maple 'Cinnabuns' 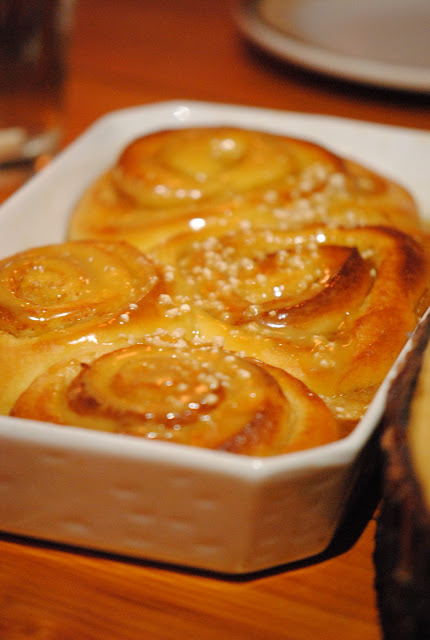 Although I am not the biggest fan of cinnamon, this 'cinnabun' was really soft and tender and the maple butter on top made it wonderfully sticky.
12. Pancakes fried in duck fat 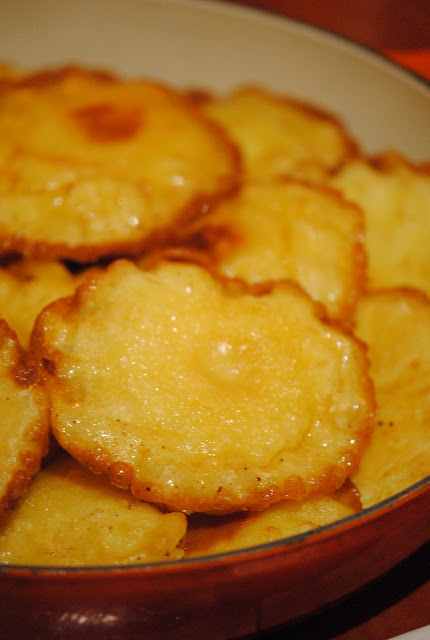 Light and fluffy, these pancakes are quite an experience!  They fried them in duck fat giving them a crisp and golden exterior, drench those babies in maple syrup and you are one step closer to nirvana.
13. Maple éclairs with maple cotton candy 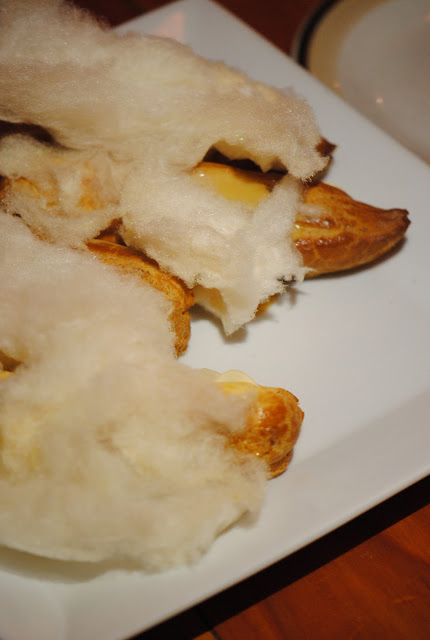 Their maple cotton candy is a significant upgrade to those artificially flavored ones we used to have in amusement parks. Adorning beautifully the éclairs which were filled with maple cream, it was the perfect end to a perfect meal.
Although you will be in a food coma for the following week, I guarantee you that this is one of the most worthy meals you can get! 57$ for 12 services + one meat pie (2$) which included foie gras, lobster and duck?!? It is a steal! The best thing  from this sugar shack is that they allow doggy bags! Thus, no waste and happy breakfast in the morning :)
Either in a traditional sugar shack meal or an extravagant version from Martin Picard, Quebec is really offering us its most seeked treasured and our chefs and sugar houses are cooking it the best way there is! Hats off to the liquid gold of Quebec!!! Have a good sugaring off season peeps! 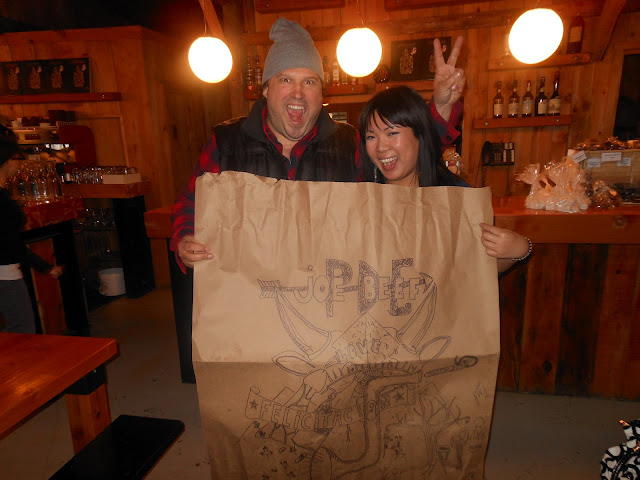 For some maple syrup 101, go check out my guest post at http://guestaurant.com/chef-martin-picards-truly-canadian-pop-up-cabane-a-sucre-au-pied-de-cochon/!!!
All photo credits go to Stéphane Brennan - www.avosmoleculescuisinez.com

Sincerely reviewed by The Sassy Foodophile at 4:02 PM