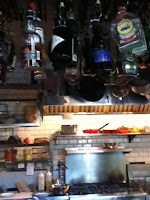 Wow! I must say that this experience was mind-blowing and unexpected! And my previous visit was not representative at all of what Chien Fumant can offer! My oh my! I am still in awe and my tummy and taste buds are oh so satisfied!
My foodie partner from last time returned and swore that what he ate was not nearly comparable to the brunch we had.  All righty then, I believe we can never judge the quality of a restaurant by only going once.  Here I come. 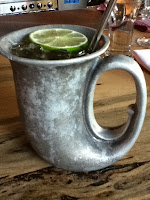 So there we were sitting by the bar, on the friday night dinner service.   It is mandatory to choose this place to truly feel in the action; the barman skillfully preparing the drinks, the chef magically whipping out mouth-watering dishes and mostly the comraderie felt between the staff! I started out with a drink recommended by the barman and served in the coolest metal pint ever! Again, they gave a stainless steel straw :) All those little details! My rhum, ginger and lemon drink was kept cold for the time i drank it! 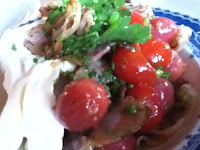 To my surprise, they have burrata!!!! This is a cheese that is extremely rare in montreal as it has to be consumed within 48 hours of its make and from my knowledge, it is only made in Italy.  Burrata is an envelope of mozarella cheese in which cream and strands of mozarella cheese are enclosed.  It is oozing goodness in a bag! And Chien Fumant served it 'All Dressed': with pork cheeks that were aged in the house for three months, juicy tomatoes, parsley and some olive oil.  Oh My God! Wow! I've tasted burrata a couple of times but never like this.  As soon as you dig into it, the cream flows out and mixes with the smoky and savoury pork.  Then, the mouthful is complete with the freshness of the tomatoes and parsley all well binded by a touch of oil.  I am not even kidding, I was going to lick the plate! But they gave us big thick slices of bread to do so... no dishwashing machine needed! Sab and Phil are here! 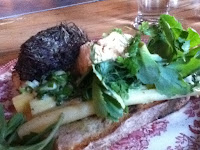 Then, we ordered Quebec cultivated urchins, with white asparagus and ravigotte sauce.  Urchins! Hello!!! In how many restaurants in Montreal can you actually eat urchins?!? And Quebec cultivated! The urchin was made into a creamy butter which revealed hints of sea flavors and sweetness.  Served with its shell as decoration, the butter was resting on a hot slice of bread with the white crisp asparagus and the incredibly aromatic herbs sauce.  The result was flabbergasting! Again, the plate was well licked ;) 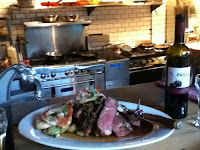 Before La Piece de Resistance, the barman suggested a nice and bold wine from Portugal; Duro 2008 Passa.  Then IT arrived, the marvelous, massive, wonderful rib steak plate.  It was not on the menu, again i am lucky enough to be friends with someone that knows the staff of the restaurant.  It is a surprise du chef! It was huge! It was pretty! It smelled heavenly! And gosh it was an orgasm for my taste buds! The rib steak was seared perfectly to create that caramelized and crunchy crust while maintaining a perfect pink interior.  It was so well marbled that it just melted in my mouth! and huge shrimps were accompanying the meat with a green herb sauce on it.  They were crisp and sweet and complementing oh so well their version of surf and turf! To lower our culpability of eating the whole cow, fresh and plump tomatoes and buttery and melting potatoes were sharing the plate with the crustaceans and THE cow. But oh god! I have not felt this happy in a long time I must say! The biggest satisfaction was to munch on the bone, tearing all the crunchy and fabulously tasty bits from it :)  (I admit that this post is very carnivorous)
Le Chien Fumant even have their own chamber where they cure their meat.  The view is simply jaw-dropping.  Tha fact that a restaurant is curing their own stuff says a lot about it!
I officially proclaim Chien Fumant in my top restaurants in Montreal.  The service, the ambiance, the drinks, the food!!!! Wow wow wow! I have not found any negative comments to say about them this them! I will definitely return as their menu changes frequently to adapt to the local market arrivals.  I highly recommend this restaurant to any foodie! Great thanks to chef Max and the bartender Nick for the awesome experience I had!

Sincerely reviewed by The Sassy Foodophile at 9:01 AM