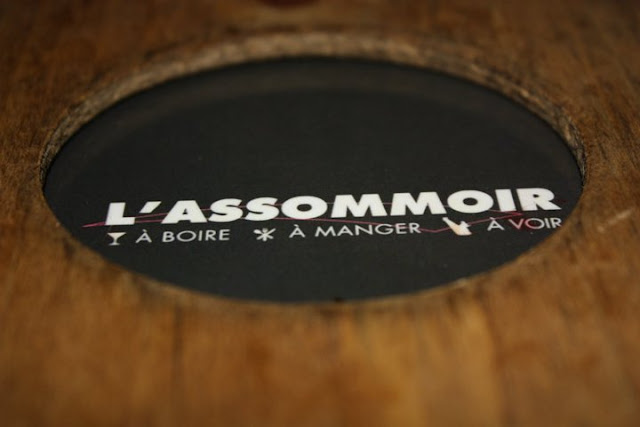 Assommer: A french verb meaning 'to knock out'
L'Assommoir according to Wikipedia: Émile Zola's seventh novel in its series Les Rougon-Macquart.
L'Assommoir according to the Sassy Foodophile: A montreal restaurant which will knock your senses out
Yup, either it is the smell, the music, the view, the texture and the oh-my-god taste, it is euphoria!  I went to L'Assommoir a few times now.  Ideal for dining in groups or for romantic dates (although a little noisy), L'Assommoir offers diverse menus adapted for everyone's need.  For instance, they have 9 different group menus which targets meat lovers, seafood lovers, the adventurous ones, or the undecided group ;) The names are fun and creatives!  And I can guarantee that whatever choice of menu you end up with, you will at least be satisfied with one of the items.
Here are some dishes among others that I have given a try:
Tapas to share: The dish included plantain chips which were extremely crispy and addictive, salsa (tomato, chipotle and coriander) to dip in, marinated olives, 3 peppers hummus served with zaatar bread (just looooooveee that bread! tangy taste of the sumac just blends perfectly to the creamy hummus), salmon candies with strawberries, pineapple and sesame seeds (very interesting texture! It literally feels like you are eating a candy! A jelly like candy! It is mind blowing! however, the salmon taste is not very present and is masked by the syrup and the fruits) and cod fritters served with roasted garlic tomato sauce. 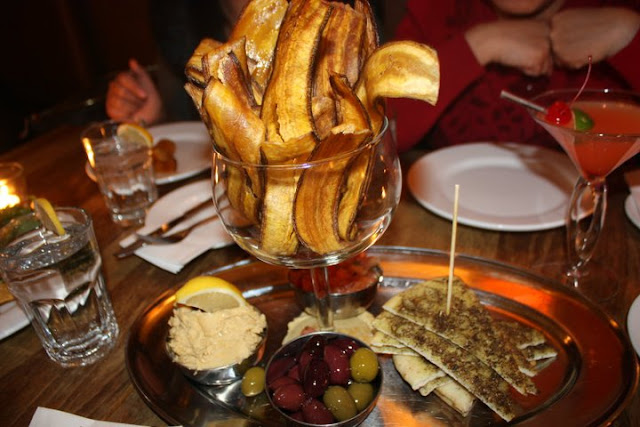 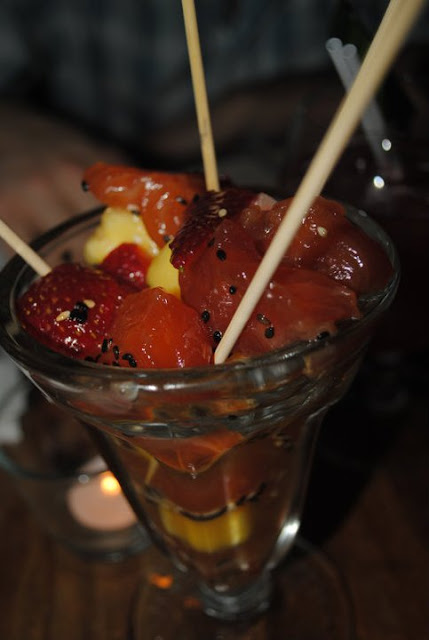 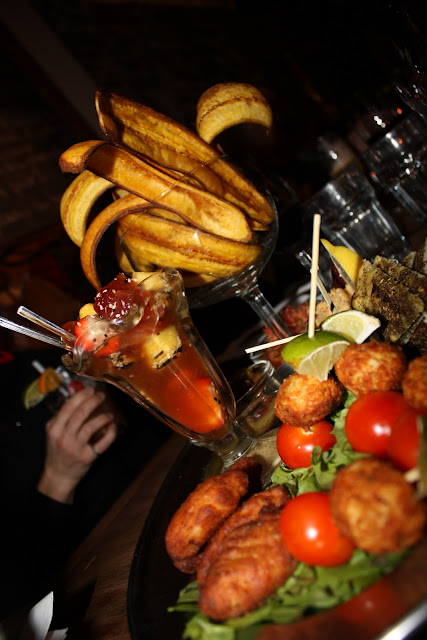 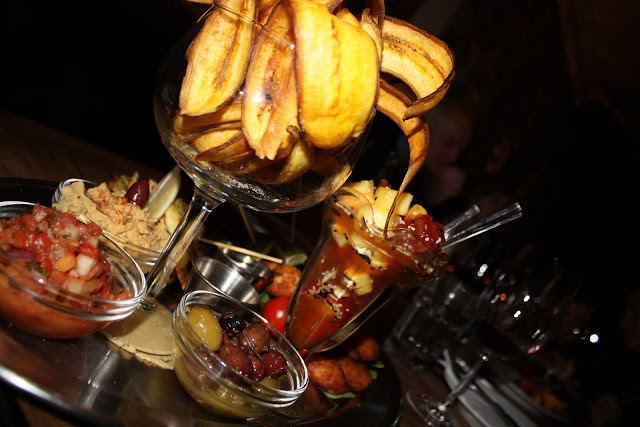 Ceviche: By definition, ceviche is a seafood dish in which its components have been cooked by the acidity of lemon juice or lime.  The citrus brings a kick to the dish while letting the freshness of the ingredients shine through. And must I say, I think L'Assommoir do deliver it well!  I have tried the mixed Ceviche which is composed of scallops, shrimps, salmon with a salsa made of corn, chipotle and tomato.  The slight spicyness of the chipotle and the sweetness of the corn just balances well the acidity brought by the citrus. 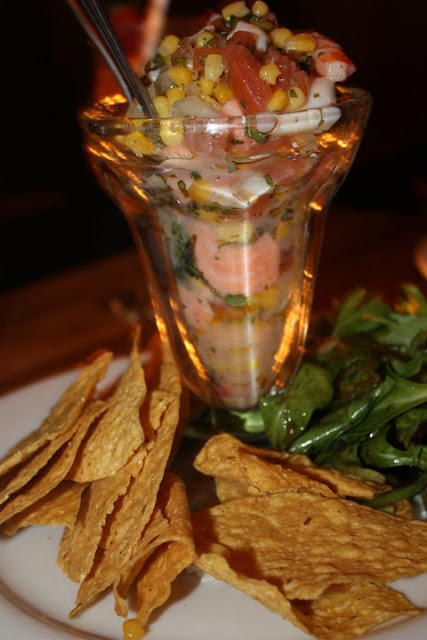 ﻿
Plateau Mar Y Montana - Assortment of shrimps, salmon, bavette, grilled chicken and chorizos. As sided dishes, potatoes sautéed in duck fat, grilled veggies as well as three sauces (mustard, spicy tangy tomato, sweet fruity one; I didn't care too much for them, i prefer to taste original flavor of the meat and seafood).  This portion is meant for 2 to 3 persons but with the appetizers we had, it was well enough! There was nothing too wow with the shrimps and chorizos. The latter was rather salty. However, the bavette... mmmm... well browned and caramelized on the outside, while the pinkish interior was oozing with flavorful juices, delish! The chicken was also tender to the fork! and the salmon was cooked to perfection and the crunchy crust made it even better (even my dad who hates fish ate some! Thats is quite an accomplishment!) 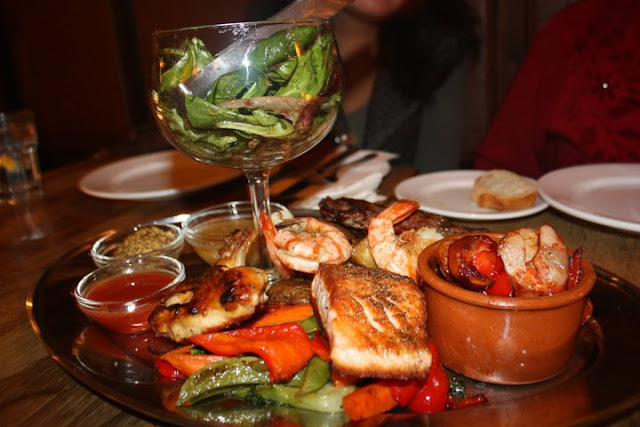 The Meat eater plate ;) : To the meats mentionned above are added sausages, lamb shank, pork chops, and duck confit leg. Again, the meats are wonderfully cooked with seasoning to its simplest thus not shadowing the marvelous flavour of meat.  The duck was a little bit on the dry side but to its defense, the crispy skin was very pleasant.  But the bavette definitely is the most outstanding piece. Also, good thing salads and veggies are included in the dish to lighten up! 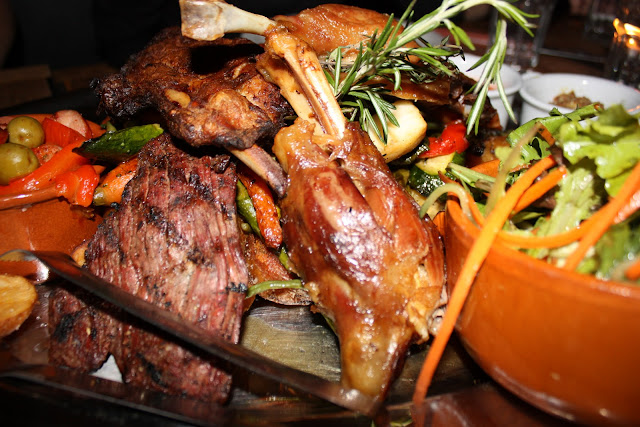 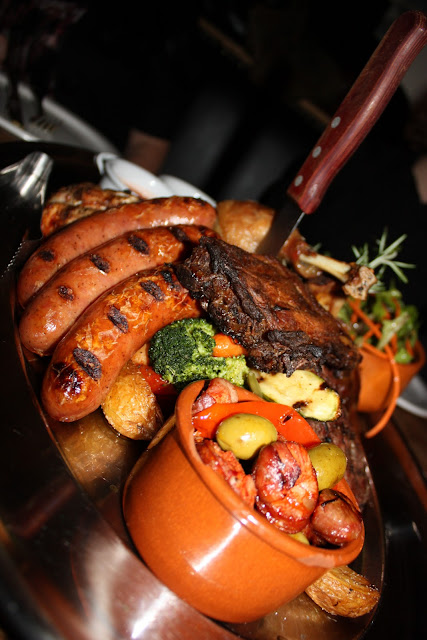 To satisfy the sweet tooth, we tried various desserts such as the creme brulee, the chocolate fondue and the pudding chomeur. The pudding chomeur is served with maple caramel whisky  and convinced many of our southern neighbours of the awesomeness of traditional Quebec cuisine and ingredients. Booh yeahhh!
In addition to their elaborate menu, L'Assommoir has also developed an expertise in mixology.  Their catalogue of drinks is never ending and they propose original recipes for different types of alcohol.  Not only are the bartending staff very knowledgeable but they are also great at entertaining the crowd by performing various tricks with their drinks!
All in all, I believe that this restaurant does combine successfull items which makes me want to go back :) I've heard a lot of mixed reviews concerning both restaurants, especially the one in the old port concerning the service.  Personally, I did not have any issues with either one and was pleasantly surprised by the courteous and effective service! Conclusion, I'll be back folks ;)

﻿
Sincerely reviewed by The Sassy Foodophile at 1:48 AM