You can make your life sweeter!!! Let's flavor trip with miracle berry!

Yes! It exists! A magical little berry that gives a sweet taste to unexpected food! What?!? What do you? How do you? Why would you? Yeah, I know, it sounds like a crazy drug doesn't it? My mom really thought that I was going to a party full of drug hippies when I told her about it.  Especially because it is called a Flavor Tripping Party... No no mom, i am just exploring the science of a fruit! It is a study case for my blog! Ha... no credibility at all! 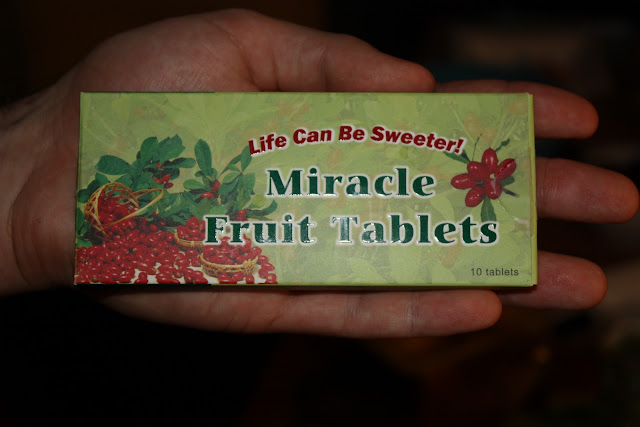 First, I will like to thank kindly Jen from the awesome Braised And Confused blog for extending out this invitation to me! Flavor Tripping parties are growing across the US regrouping curious and adventurous peeps seeking surprising and crazy sensations with food! Specifically, with this mysterious berry... the Miracle Berry... or to be more scientific the Synsepalum dulcificum.
Now, what is it?  This berry originates from West Africa and has been discovered in the 18th century.  The pulp of this seeded red berry was originally intended to sweeten palm wine.    It could also be used to mask the sour flavor of expired corn bread. In the 1970s, as the miracle berry was being discovered slowly by New Yorkers, excitement and curiosity was growing around the mysterious benefits of this fruit! The food industries started exploring the use of this berry in sweet foods that will be appropriate for diabetes patients without leaving any after taste.  It was indeed a miracle to their eyes! However, the FDA banned it to use it as sweetener and classified it as a food additive (1). Ever since, the miracle berry is commonly used as mentioned above for flavor tripping parties (2).
How? Numerous research have been done on this fruit but the information is scarce on the internet.  Basically, the magic behind the fruit is the glycoprotein: miraculin. Its activity is prohibited by low pH (high acidity) ie. in the presence of sour food, your taste buds perceives it as sweet. It is said to bind to the sweet taste buds and change its shape when it captures acidic food. The magic effect do not work on salt and bitter taste nor under heated conditions as it goes under denaturation (protein changes shape thus altering its properties) (3).
Enough theory, let's go for the fun part! We were told to bring any food that we might think it will be interesting to experience with.  I invited my loyal food companion, À vos molécules et cuisinez's author Stéphane which has a strong background in food chemistry and is more than curious about this kind of stuff.  He suggested that we go along and try with different kind of acid: malic (apples), lactic (yogurt and goat cheese), acetic (vinegar, pickled food). Flavor tripping party websites also suggest Guiness beer and tabasco sauce.  They should taste like chocolate milk and donut glaze respectively... we'll see about that! 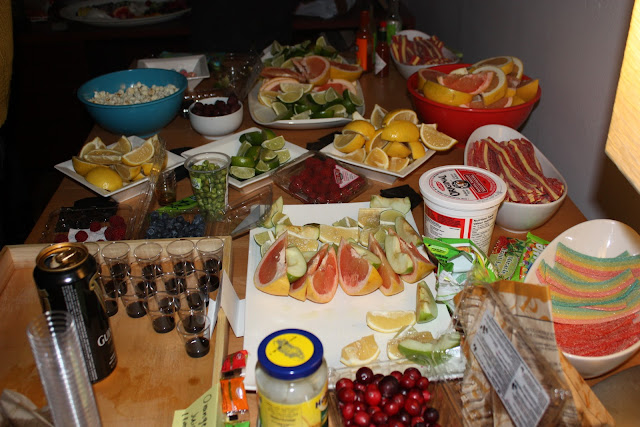 ﻿﻿
﻿﻿
The fruit comes in different forms: as the fruit itself (frozen to keep its freshness through the transportation), in granules or in tablets.  For the Braised and Confused Flavor Trip X event, we were offered both the fruit and the tablet to fully experience its effect.  For the fruit, it is important to coat fully the tongue with the pulp for 2 minutes.  Each individual reacts differently and the magic should last around 30 minutes.
The berry tasted a little bit like a bland cranberry.  The seed was relatively large thus not leaving too much pulp to play with... Boris from The Gluttoners were on the same boat as us.  The effect was clearly not that noticeable with the fruit.  Maybe I didn't do it right. Stéphane did feel his tongue a little numb after a few minutes and it seemed to work for him... Biting into a lemon still made my face pucker... Brrr!
However, the tablet was a whole different story! By letting it dissolve completely on the tongue, the effect is pretty instantaneous.  The effect is longer lasting (around 1 hour). It gave the impression that the citrus fruits were injected with sugar! The lime really tasted like lemonade!  The grapefruit was supersweet with its bitterness only coming in at the very end.
Now with the real stuff.  TABASCO.  Some videos claimed that pouring tabasco sauce in the mouth of one will leave this latter flabbergasted because it will taste nothing like the hot sauce... but more like doughnut glaze! Sceptic, I tried pouring some hot sauce in balsamic vinegar instead.  Hum hum.  Yes, it was less acidic but I can strongly confirm that it was still hot and the balsamic did kept some of its characteristic taste.   It was bearable to drink but I wouldn't make it my daily substitution for tea.  And Steph did found that the Guinness really tasted like carbonated chocolate milk.  The miracle berry had the capacity to hinder the ethanol aftertaste letting some of its more pleasing notes prevail.   The plain yogurt had a vanilla flavor.  Olives still tasted very salty. Cranberries still had the bitterness to it without as much acidity.
Conclusion? Flavor tripping is an awesome concept! However, all of the articles going around on it are overestimating the power of the berry.  Chemistry wise and now because of my own experience, the miracle berry only works on acidic items. Not on salty nor bitter foods.  There is a certain effect of group reaction and psychology/mind playing behind all the hype.  Moreover, although it does alter the taste of sour foods, it doesn't erase its effect on the digestive system... if you know what I mean. Loads of acidic food = tummy not so happy.
I am definitely keen to participate in other flavor tripping parties.  Just watching the reactions of people is totally worth it.  Big thanks to Jen from Braised and Confused! And I had the pleasure of meeting Emilie from La Bouche Pleine and Boris from The Gluttoners.  And of course, thank you Steph from À vos molécules et cuisinez! for coming to this adventure with me! Go check out their blogs!
Sincerely reviewed by The Sassy Foodophile at 8:42 PM